As part of the state’s new Ohio Brownfield Remediation Program, the City of Loveland has received a $3.3 million grant for cleanup/remediation of the Chestnut Street Property.

The 8.33-acre Chestnut Street Property, which the city has owned since 1979, served as a sand and gravel quarry prior to 1932 but became a site for uncontrolled dumping. Past environmental studies, commissioned by the city, have discovered lead contamination in the soil and tetrachloroethylene (PCE) contamination in groundwater, along with significant amounts of other solid waste requiring disposal.

Until now, remedial services to bring the site to a point of approval from the Ohio Environmental Protection Agency (EPA) have been cost-prohibitive, limiting the city’s ability to sell the property to potential buyers or to pay for remediation to maintain for city use. 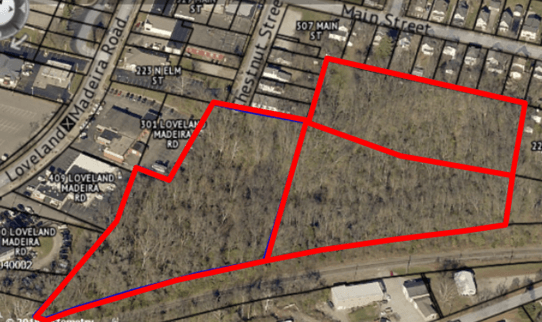 June 24, 2022
Patriot Engineering contracted with Choice One Engineering as a sub-consultant to prepare a preliminary development plan and grading plan for purposes of completing the Preliminary Jurisdictional Determination Application (PJDA) required by the United States Army Corps of Engineers, which will ultimately authorize excavation and clearing activities on the site to commence. Approximately 0.11 +/- acres of wetlands were identified on the site, which is significantly less than originally anticipated based upon an analysis of the available USGS Wetlands Mapping. Once the PJDA has been submitted and reviewed by the Corps of Engineers, and the findings of the report have been confirmed, the city and its consultant team will begin the process of mitigating the wetlands located on the site, subject to the requirements established by USACE and Ohio EPA, respectively. Mitigation will then clear the way for remediation, site clearing, excavation, and grading activities to commence.

August 19, 2022
The city received the Preliminary Jurisdictional Determination Letter from the United States Army Corps of Engineers (USACE), confirming the findings of the Wetlands Delineation Study. USACE concurred with the Wetlands Delineation Report prepared and submitted by Meristem, a subconsultant for Patriot Engineering, finding that the site only contains 0.11 acres of actual wetlands. This important milestone clears the way for the city to continue its work to obtain the necessary clearing and grading permits to accomplish the remediation work on the site contemplated under the Brownfield Grant. Future work will involve the preparation and submittal of a Pre-Construction Notice package to USACE, as well as coordination of reviews by USACE with the United States Fish and Wildlife Service and State Historic Preservation Office. Future mitigation efforts will also include purchase of wetland mitigation credits through a recognized mitigation bank.

August 26, 2022
The city filed the Nationwide 404 Permit with the United States Army Corps of Engineers with the assistance and guidance of Patriot Engineering and Meristem. This permit will grant the city authorization to begin clearing and grading the site in furtherance of the environmental remediation efforts contemplated under the Ohio Brownfield Remediation Grant. Also, bid documents for the lead remediation and cleanup were posted.

September 23, 2022
The city continues to work with Wetland Consultant Meristem and Patriot Engineering to secure wetland mitigation credits to allow the issuance of the Nationwide 404 Permit from the U.S. Army Corps of Engineers and the corresponding 401 Permit from Ohio EPA. The city hopes to have the bulk of the mitigation bank work and permitting approval accomplished in the next 45 days. The city will be purchasing mitigation bank credits from a source yet to be finalized, to allow this work to proceed. Also this week, the city secured the contract to perform the lead soil excavation and debris removal work with Buckeye Elm Contracting, and also opened bids for the Groundwater Remediation Project. Bids will be reviewed by Patriot Engineering, prior to an award recommendation being advanced to City Council.

October 28, 2022
City Council awarded the bid for groundwater remediation at the Chestnut Street property to Innovative Environmental Technologies, Inc., which will result in remediation of existing groundwater contamination. This work will follow the debris removal and lead soil  excavation, which were previously awarded to Buckeye Elm Contracting. The city will be reimbursed for 75% of the total expenditures, up to the full grant award, through the Ohio Brownfield Redevelopment Program grant that the city was awarded. Once the remediation activities are completed, monitoring will take place prior to the issuance of a “No Further Action” letter. Once finalized, the property can be readily marketed for redevelopment.

November 21, 2022
City staff and Patriot Engineering continued efforts to finalize the U.S. Army Corps of Engineers permitting questions and to furnish additional information responsive to the Corps’ requests. Once all additional information is provided, the city, subconsultant Meristem and primary consultant Patriot Engineering will move forward with finalizing the mitigation and clearing and grading permits once approvals are received from the Corps. Once permits are in hand, mitigation and remediation work will commence on the site.

December 2, 2022
The city and Innovative Environmental Technologies Inc. continue work to finalize the groundwater contamination remediation scope of work and contractual agreements. The Nationwide 404 Permit documentation is still in the approval process.

January 9, 2023
The United States Army Corps of Engineers (USACE) notified the city that the Nationwide 404 Permit has been approved. Now that the 404 Permit is in hand, the city can secure additional state permits and purchase wetland bank mitigation credits needed to comply with the terms of the USACE permit. Once secured, the city will issue notices to proceed to the remediation companies completing the work.

January 20, 2023
A pre-construction meeting was held in advance of commencing work to remediate the environmental contamination at the Chestnut Street Property. Wetlands have been marked and preserved in advance of the remediation activities, and a boundary survey will also be completed to stake the property limits in advance of the proceeding work. Additionally, the city continues to work with Meristem and Patriot Engineering to secure the wetland mitigation bank credits through the Nature Conservancy Ohio – In Lieu Fee Program – Jacoby Branch Mitigation Project as required by the 404 Permit.

January 30, 2023
The city, along with Meristem and Patriot Engineering, worked with the Nature Conservancy of Ohio to finalize wetland mitigation bank credits within the Jacoby Branch Watershed, which will offset impacts to approximately 0.10 acres of wetlands located on the Chestnut Street Property as required by the Nationwide 404 Permit. Contractors continue to mobilize in preparation for carrying out site remediation activities. 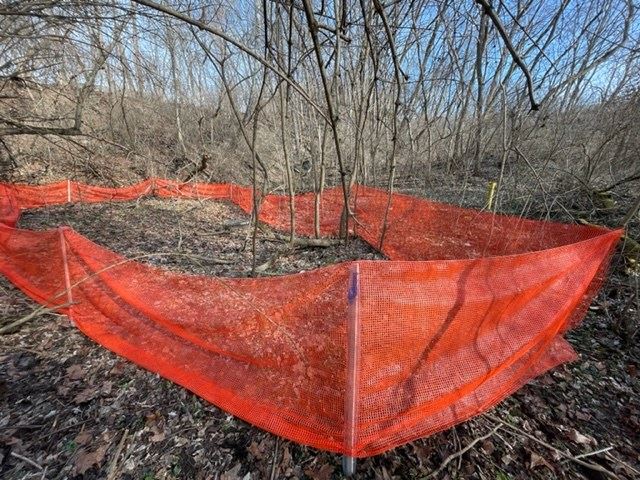