Duke Energy has scheduled several projects in the city. 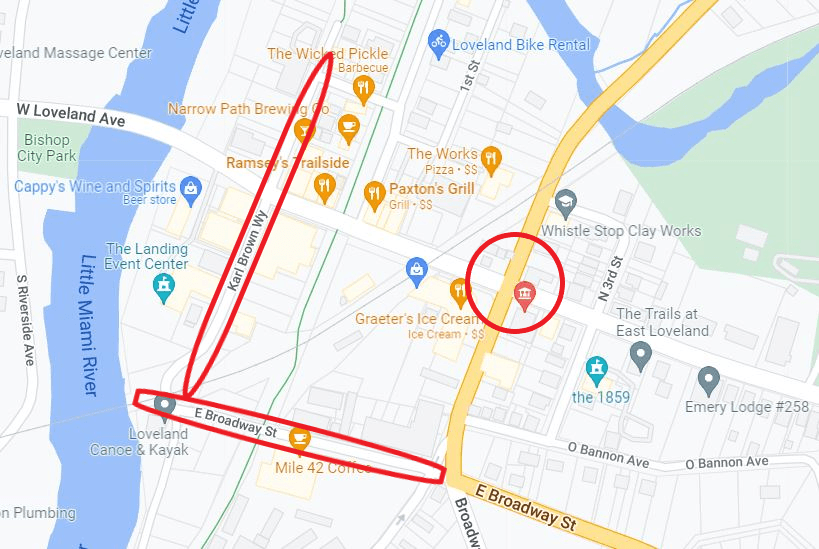 Work will occur Monday-Friday after 9 a.m. Overnight work will not take place. Single lanes will be closed with two-way traffic maintained by flaggers. Some sidewalk access and on-street parking will be restricted as needed to facilitate the work. 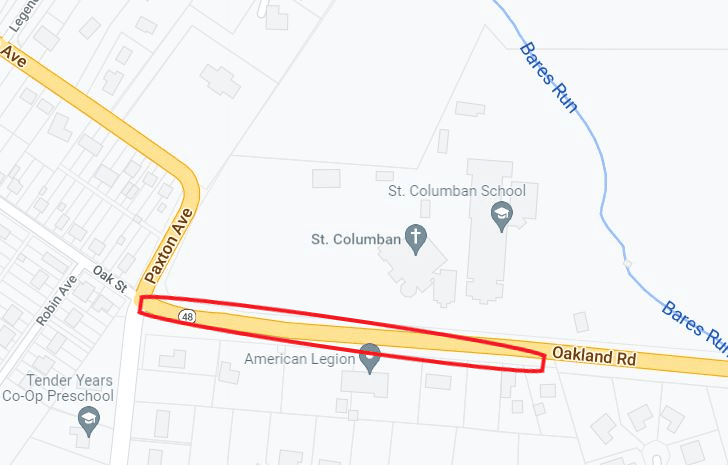 State Route 48/Oakland Road Gas Main Replacement - Duke Energy will complete approximately 3-4 weeks of gas main work along State Route 48/Oakland Road from late November 2022 to Spring 2023. The road will be affected from the east end of St. Columban’s property (just past the football field) to the intersection of Loveland-Miamiville Road/Oak Street. This project will require day and night work. For day work, single lanes will be closed with two-way traffic maintained by flaggers. For night work, a portion of State Route 48 (at the Loveland-Miamiville intersection) will need to be fully closed for a portion of the project. The road will be fully closed from 9 p.m. – 6 a.m. with the road reopened during the day. Overnight traffic will be detoured.

Annual Road Program — The city has budgeted $1.2 million for its annual repair/paving program. Contract bidding began in February 2023. A road list will be published in early spring. 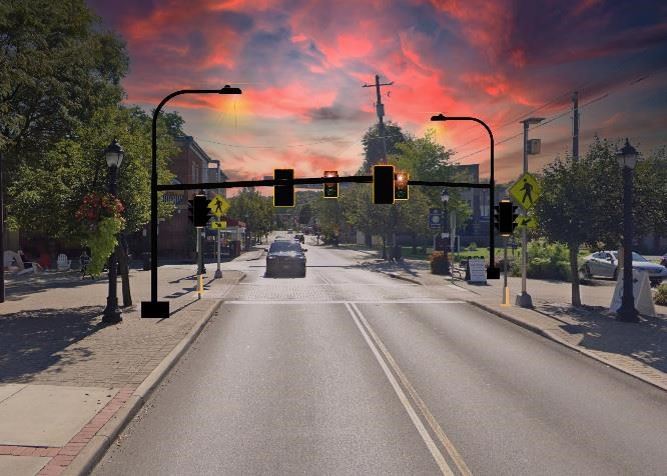 Automated Signal at West Loveland Avenue Bike Trail Crossing — The city has been awarded a grant to install an automated traffic signal system at the Little Miami Scenic Bike Trail crossing along West Loveland Avenue. To create the new system, two types of signals will be installed — traditional overhead traffic light signals for vehicles and traffic light signals designed for trail users. The system will deliver automatic traffic control and establish “Right of Way.” Currently, the West Loveland Avenue crossing has a pedestrian-activated flashing crosswalk system, and crossing guards work high-volume events to improve traffic flow through the crossing. Design work will take place in 2023 with the proposed installation in 2024. 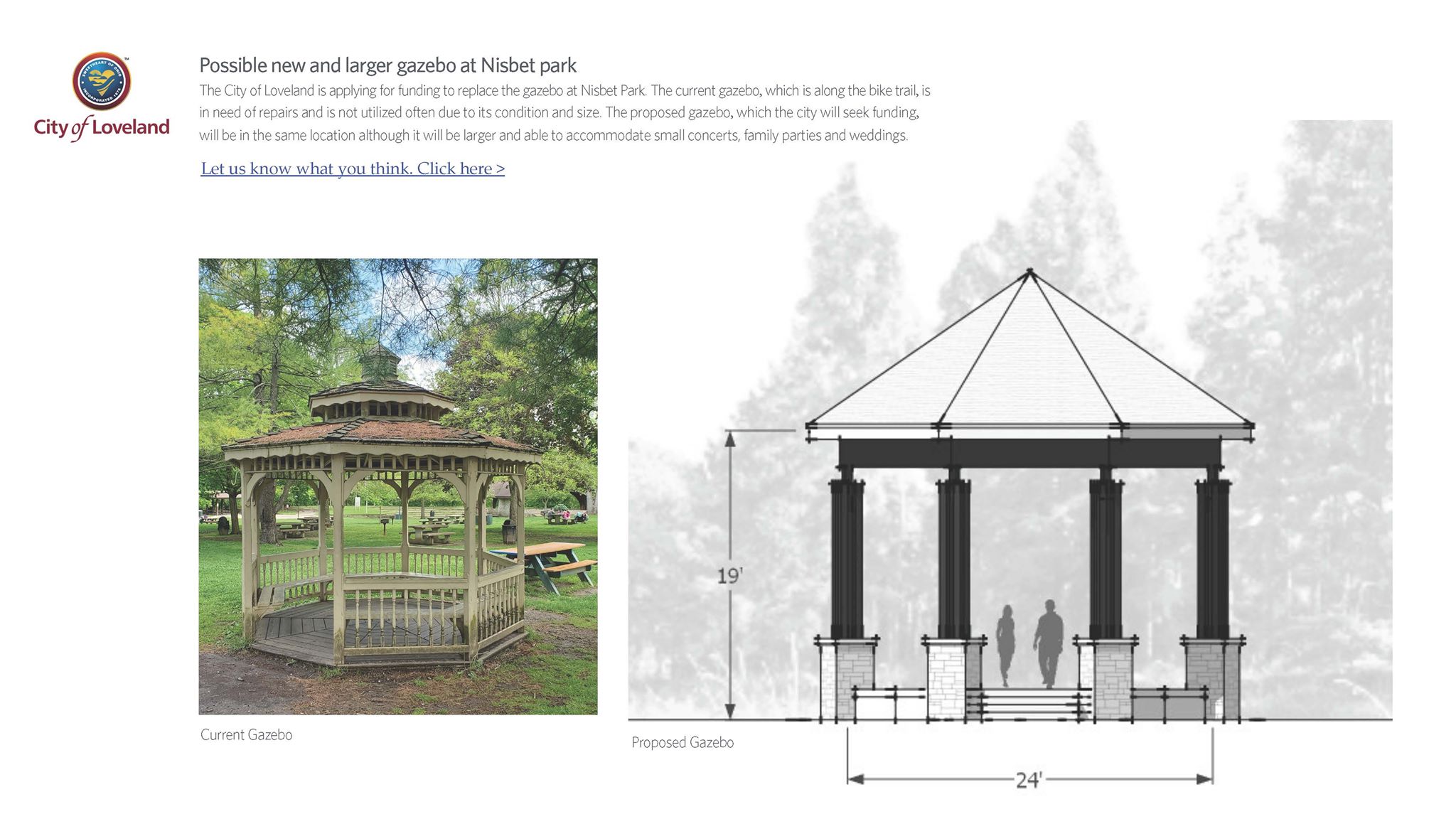 Nisbet Park Gazebo - The 2022 budget included $115,000 to install a gazebo in Nisbet Park, partially funded by an ODNR grant. Installation was planned for 2022 but was delayed due to supply chain issues. Construction began in January 2023 with anticipated gazebo completion by April. In addition, a pathway will be installed to connect the gazebo to the Little Miami Scenic Trail.

Harrison Avenue Widening Project - The city is receiving $370,000 of State funding of an estimated $462,600 construction project to widen Harrison Ave. between Karl Brown Way and Railroad Ave. from 16'-20' existing width to 22' width. The project includes realignment and relocation of Harrison Ave. between Railroad Ave. and First St. to the north by approximately 70', in preparation for a planned 270-space parking facility.  Additionally, the project will include the installation of 5' wide concrete sidewalks and curb along the south side of Harrison Avenue.  These improvements will positively impact safety along the Little Miami Scenic Bike Trail, which has been a concern of the city's first responders. The project will also include the replacement of catch basins, upsizing of storm sewers, and addition of a headwall with flap valve at the pipe outlet, improving drainage and safety in the area.  Completion of the Harrison Avenue Widening Project will allow for the city to proceed with implementing the Nisbet Park Master Plan and corresponding improvements once the storm sewer outlet pipe through the park is complete.  Other improvements include enhanced signage, pavement markings, restoration, and other incidentals. Work will not begin until after July 2023.

Second Street/State Route 48 Improvement (Mobil Station) - The city, working in partnership with the Adams County Land Bank, took possession of the former Mobil Station site after the prior owner concluded fuel center and retail operations, thus clearing the way for the property to be transferred. With the cessation of fuel center activities on the site and the associated transfer of the property to the land bank, the city can now begin the process of completing the environmental inspections required to demolish the former fuel center, remove the existing underground storage tanks, pursuing additional funding to assist in remediating current known and unknown issues associated with the past fuel center use. To date on the site, asbestos testing work has been completed, which allows demolition efforts to proceed through the State of Ohio Demolition Grant program administered through Clermont County. Once testing results are confirmed, the county will then bid the demolition out as part of the grant process. Additionally, with the transfer of the property, the city authorized testing to determine if there are existing, undocumented petroleum releases associated with any active underground storage tanks on site. Once the site is remediated, a right turn lane will be added along SR 48 to improve traffic flow. 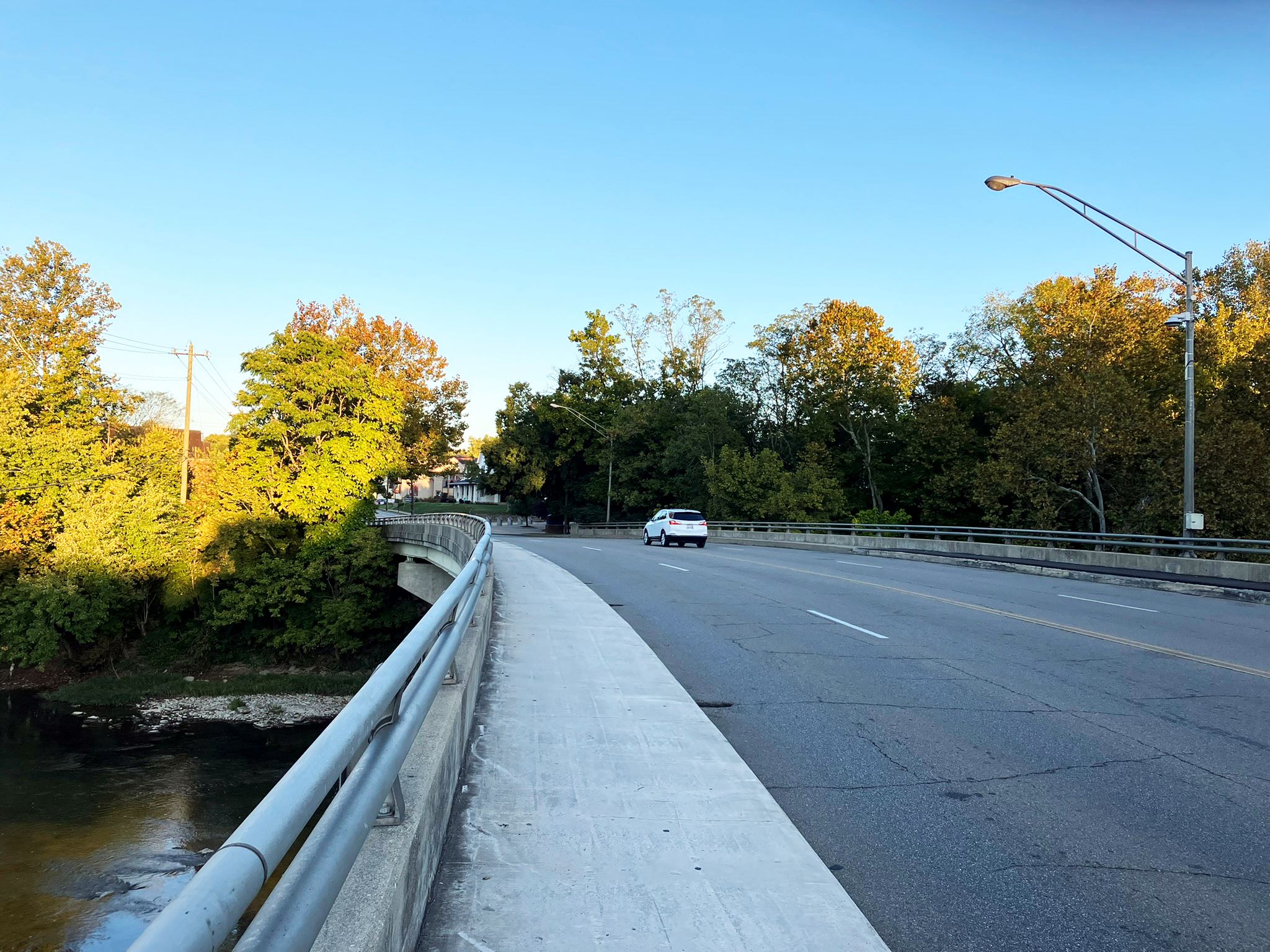 West Loveland Avenue Bridge — The West Loveland Avenue Bridge is scheduled to be repaired in 2023. The bridge is owned and maintained by both Clermont and Hamilton County, and the project is being largely funded by Hamilton County, state grant funding and an allocation from the Clermont County Commissioners. The city is contributing funds toward decorative railing and new lighting. In 2021, the city and Hamilton County submitted a joint grant application to replace the north sidewalk, as well the railings, walls and bridge abutments. However, private utility relocation for conduit located within the sidewalks delayed the project. In July 2022, the north side of the bridge's sidewalk was paved with asphalt for pedestrian safety. The bridge will remain open to traffic with a reduced number of lanes during the repairs. As a project timeline is finalized, the city will publish construction dates. 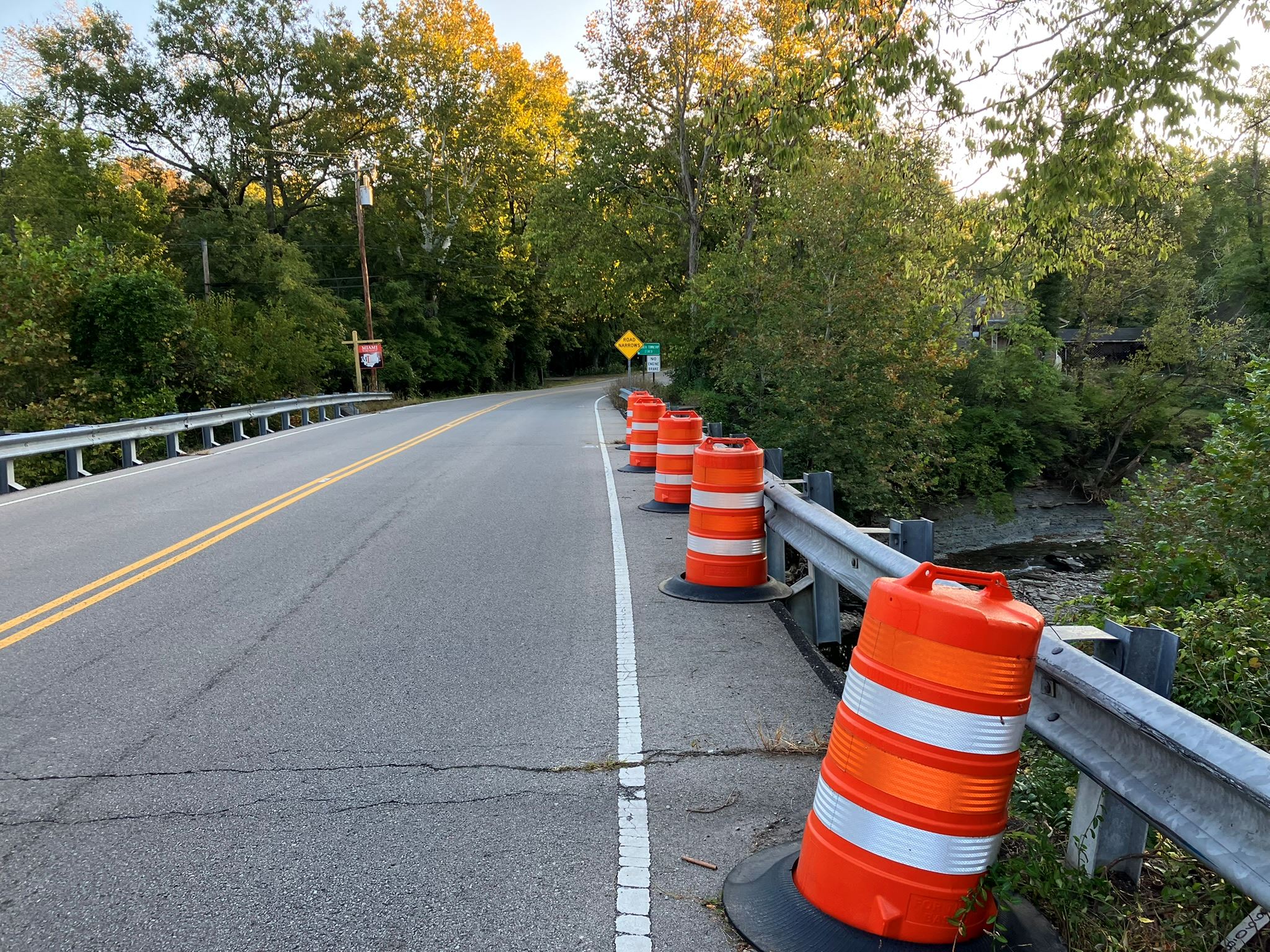 O’Bannonville Bridge — The Clermont County Engineer’s Office will replace the bridge on O’Bannonville Road near Hutchinson Road, which is located east of the city limits in Goshen Township. The county expects to begin construction in July 2023 and have it completed by fall. This project will require a roadway closure and detour route. 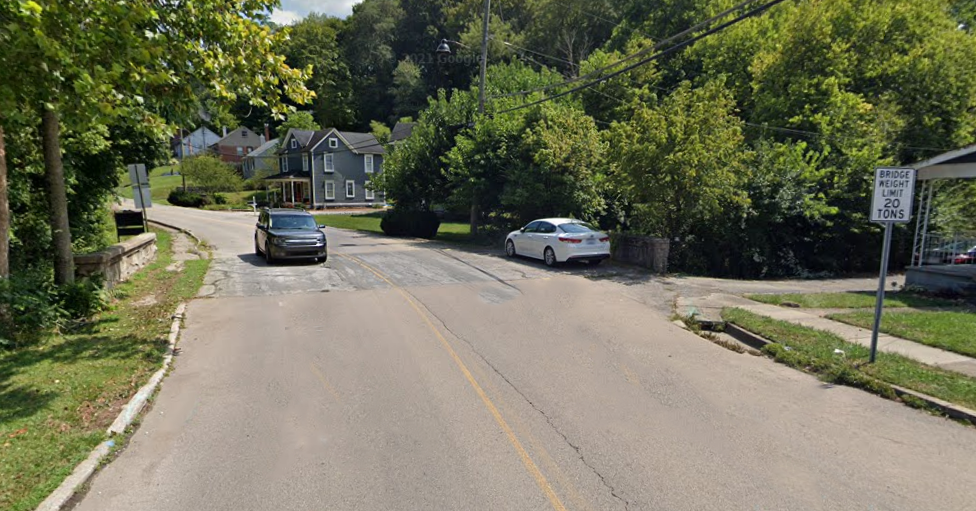 East Loveland Avenue Improvements — In Fall 2023, immediately following road re-opening after replacement of the O’Bannonville Bridge, a joint project with collaboration from Clermont County, MSD, and the City will commence.  Clermont County is providing $478,320 for the replacement of the bridge on East Loveland Avenue over Bares Run, near #250 E. Loveland Ave. Metropolitan Sewer District (MSD) will replace and upsize about 1,300 LF of the sanitary sewer, from #220 to #362 E. Loveland Ave. MSD is paying a total of approximately $686,200 for the sanitary sewer work. The city is receiving $722,400 of State grant funding to install sidewalks on both sides of the road between #227 to #356, relocate water main around the bridge, make storm sewer system improvements, and repave the roadway while the bridge replacement project is being performed.  This project will require a roadway closure and detour route.

Nisbet Park Pedestrian Bridge (Little Miami Scenic Trail) — The Ohio Department of Natural Resources (ODNR) will replace the pedestrian bridge on the Little Miami Scenic Trail over O’Bannon Creek. This is the bridge just northeast of the restroom building in Nisbet Park. ODNR will temporarily close the bridge starting March 6. It will open again at the end of March and then close from May - October. There is no designated detour.

Navaho and Cherokee Tot Lots - The city has received funding to replace the playgrounds in the tot lots, as well as to add Wi-Fi service at both parks. The new playsets have been ordered with anticipated installation in Fall 2023.

Phillips Park Playground - The 2022 budget included $60,000 to install a playground in Phillips Park to replace the one that required removal in 2021. Installation was delayed due to supply chain issues. The new playset was installed in late January 2023, followed by mulching and landscaping. 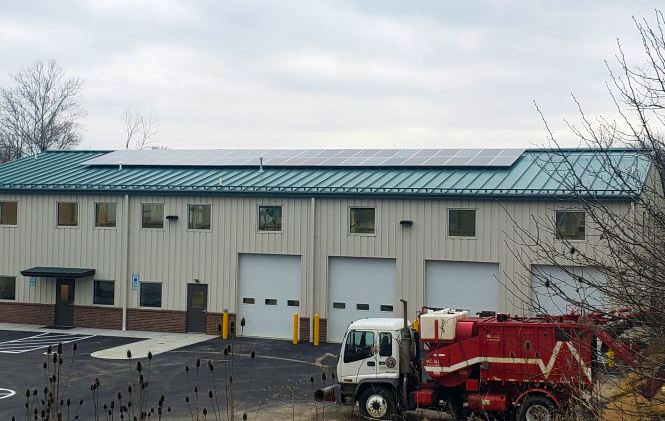 Public Works Facility - Construction of the department's new garage/office building is complete. Click here for an overview article. Click here to watch a behind-the-scenes tour of the build.