Present-day Loveland, Ohio, also known as the “Sweetheart of Ohio,” is home to over 12,000 residents spanning three counties (Hamilton, Clermont, and Warren). But before this Cincinnati suburb became the city it is today, it was first and foremost an area of picturesque valleys, rich soil, and the scenic Little Miami River, first settled in 1795 by Colonel Thomas Paxton.

In 1848, William Ramsey, a son-in-law of Colonel Paxton, signed a contract to buy 189 acres of land in Warren and Clermont Counties for $7,300. This land was eventually named “Loveland,” after James Loveland, who operated a general store and post office near the downtown railroad tracks. The town’s location at the junction of the Little Miami Railroad (built in 1853), which provided service from Cincinnati to Xenia, was a significant cause of population growth as Cincinnati commuters passed through the river town each day. 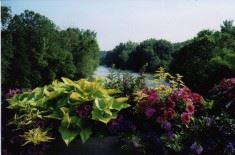 The Little Miami River, which separates Clermont and Hamilton Counties, was a limiting factor to growth in the area until the construction of a bridge in 1872. Due to this barrier, the areas on each side of the river were once referred to as “East” and “West” Loveland. The Little Miami River was also the cause of notable floods occurring in 1913 and in 1959. This issue was remedied though in 1962, when a levee and channel were constructed to reduce the water levels and possibility of major flooding.

On May 16, 1876, Loveland was incorporated as a village with a population of less than 800 residents. After a population spike in the 1950s, Loveland became a city with an adopted charter in 1961. In the 1980s, the idle Little Miami Railroad passage was converted into a bike trail and became part of the Little Miami Scenic Bike Trail in 1984.

Today, Loveland marks a flourishing community whose outstanding schools, beautiful parks, passionate arts and culture, and prime location along the Little Miami River make it both a wonderful place to visit and to live.